June was a particularly bad month for Vervet monkeys. As mentioned in an earlier posting, by the evening of June 16 we had dealt with 32 dead monkeys – two for every day, and it never got any better! June 28 and 29 resulted in seven dead monkeys In fact, this whole year has been a bad one for Vervets in general. Also, this month alone we have had more Vervets dying from Tetanus infection than during the previous twelve months – and strangely enough none of the Vervets affected had wounds that looked particularly bad. Which just goes to show that the Tetanus spore can infect a body by way of even a relatively minor injury.

Tetanus, or “locked-jaw” as it is commonly known, causes a terribly painful and emotionally traumatic death. Veterinary/medical description and diagnosis aside, what we as rescuers see is an animal whose body is being poisoned by the tetanus toxins and starts going into spasm from the head down, muscles no longer able to relax after being tensed. As the “stiffness” progresses downward the jaw locks so that the animal can no longer eat or drink and so also suffers severe hunger and thirst. The animal desperately tries to put food into its

mouth which it cannot open. Then the arms stiffen and it is forced to walk semi-upright on its legs. Finally, it stiffens completely in a fallen-over or hunched sitting position and dies, mostly conscious until just before death, starving, desperately thirsty and in excruciating pain. A horrible, horrible way to die! Those few we find are the lucky ones – euthanasia spares them hours, or even days of suffering before they eventually die.

But there was also good news. Four young Vervets were transferred from our “high care” to the Vervet facility run by Jan and James Hampton in Byrne Valley. They will form the basis of a “seed troop” for some of this coming season’s orphaned babies who will be raised by Jan and James (see www.thehamptons.co.za ).

We also released Pooh Bear, a beautiful and gentle big male Vervet who sufferd severe concussion after being hit by a motor vehicle in Kwa Mashu near Durban. His recovery took almost three months. He was released into our garden and has comfortable access to a large natuaral area, the Palmiet Nature Reserve. However, he chose not to move away and has actually joined our resident troop with ease. We see him almost daily. 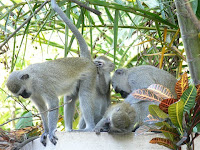 Proving the point that the Monkey Helpline is not just about Vervets, we recently rescued a Thick-tailed Bushbaby who somehow had got himself stuck in an aviary full of birds and spent a few days there before we were called to rescue him. In good health, except for a sore nose (now healed) grazed against the aviary wire whilst attempting to get out, we will release him tonight, right into the riverine forest close to where we rescued him.

In closing this posting, feel free to contact the Monkey Helpline at any time if you want to get involved or if you want advice about indigenous and exotic primates or need assistance with any primate related problems.